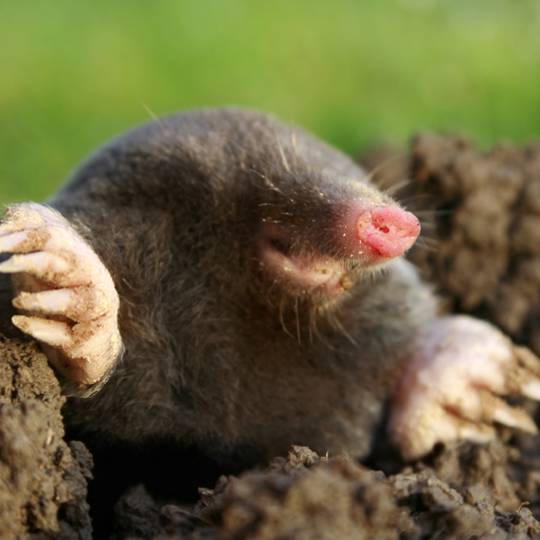 Moles are small mammals that can terrorize lawns and gardens. Moles live primarily underground and cause damage by digging tunnels and mounds.

Moles (talpidae) are carnivores that spend most of their lives underground alone. They dig day and night in search of food, up to 18’ per hour. Moles mainly consume worms, but also feed on slugs, ants snails, caterpillars, and beetles. They paralyze their prey using their poisonous saliva and transport their still-living victim underground for later consumption. Moles construct rooms in their underground tunnel networks designated for food storage. While their tunneling does aerate your soil, it can cause raised ridges of grass, which damages the root system and can cause turf, plants, and flowers to wither and die.

Raised, swelled areas and molehills are the two most common signs of mole activity. Ridges are caused by mole tunnels dug just below the ground’s surface. A molehill is the cone-shaped pile of dirt excavated by the mole as it digs tunnels around its den.

Protect plants from moles by digging a 2-foot hole, lining the bottom and with wire mesh, and filling it with soil and a plant. It can also be effective to dig a trench around a smaller garden.

Moles feed on grubs, so eliminating grubs with natural treatments like milky spore disease or beneficial nematodes can help reduce your mole population.

Spraying the ground around a mole’s tunnels and tunnel entrances with a castor oil-based treatment (available at most garden-supply stores) or sprinkling cayenne pepper in the entrances can help drive a mole away. Moles are also repelled by the smell of tar. Just dip an ear of corn in roofing tar (available at most hardware stores) and place it in one of their tunnels to make his home unlivable.

If all else fails, a mole-specific trap can be effective in killing your mole. Follow the package instructions to set it correctly and move the trap around your yard until the mole is caught.

To keep moles from damaging your lawn, contact Cardinal Lawns today. We provide thorough pest control and unparalleled expertise to help your property look its best.

Call Cardinal Lawns today at 614-808-4446 and let's talk about how we can help treat for Moles and other common Ohio lawn pests.