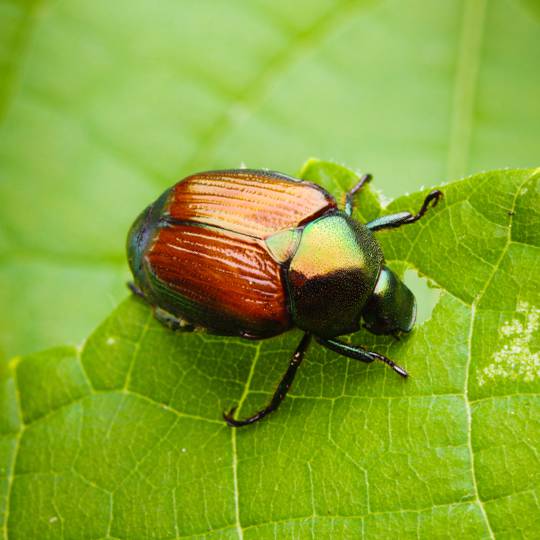 Adult Japanese beetles (popillia japonica) are identifiable by their coloring. The Japanese beetle has a metallic green body with copper-brown wing covers. Adults appear from the ground and begin feeding on plants in the early summer. The peak of their activity lasts from late June through August or September when they begin to die off due to the temperature and climate. Japanese beetles live for up to two months during their adult life.

Japanese beetles are attracted to certain plant leaves and are notorious for the damage they cause to ornamental shrubs, vegetable crops, and flowering plants. Adult Japanese beetles mainly feed on the flower source of plants and crops while larvae (grubs) feed on the roots of ornamental shrubs, plants, and grass. These opportunistic critters feed in groups, which can cause expansive damage to areas where the food source that attracts them is available. Beetles are mostly active on warm days and thrive on plants that receive direct sunlight. Feeding on flowering plants results in leaves with a skeleton-like appearance.

Adults dig out of soil, mating in the summer, and laying their eggs in short burrows. Females can lay as many as 40 to 60 eggs in their lifespans. The larvae, or grubs, feed plant roots and spend winter in dormant states. They resume their feeding in the spring and by summer pupate into adults.

Japanese beetles make themselves known by their skeletonizing of outdoors plants. Upon close inspection, an adult beetle is easily seen as it feeds on a plant. Japanese beetles are can be seen flying around the yard from plant to plant during adulthood.

Both adults and grubs can cause damage to your lawn and plants. When either are present, a combination of cultural, mechanical, and chemical controls is necessary. Japanese beetles are capable of traveling from nearby areas or neighboring plants, so the particular stages of life have to be taken into consideration when planning how to eliminate an infestation. Controlling the grub or larval stage requires the proper timing applications of soil insecticides to the infested area.

Cultural and physical controls entail planting plants that are less attractive to Japanese beetle adults as well as the physical removal of the plants and/or the adult beetles themselves. This is executed by shaking the insects off early in the morning when they are sluggish. Shake the beetles off and into a bucket of soapy water in order to kill them.

Mechanical controls consist of traps with pheromone lures. This method does not control grub infestations and can possibly attract more beetles to the area. Chemical control involves the use of products labeled for use against adult Japanese beetles.

For assistance in ridding your yard of Japanese beetles, call the experts at Cardinal Lawns. They can help eradicate infestations at any stage of the beetle’s lifespan.

Call Cardinal Lawns today at 614-808-4446 and let's talk about how we can help treat for Japanese Beetles and other common Ohio lawn pests.