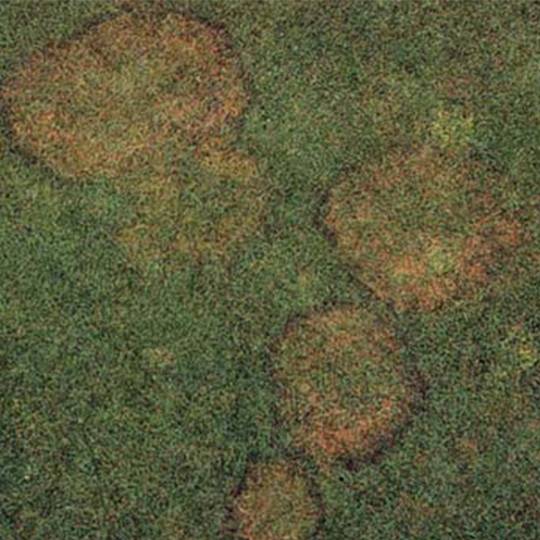 What Is Brown Patch?

Brown patch (rhizoctonia solani) is a common lawn disease that most commonly affects grass in late summer or in places affected by high heat and humidity. Caused by the Rhizoctonia fungus, it weakens the root of the grass, but does not always kill it. Over-fertilization and excessive fertilizing can make a lawn more susceptible to brown patch as well as helping it spread.

Brown Patch causes large, visible patches of damaged grass. Though it is referred to as “brown patch,” the disease is usually yellow-brown patches with dark outer rings. The rings are darker in the early hours of the morning. White fungus sometimes appears on grass blades when they are exposed to dewy, moist conditions.

Though brown patch is strong enough to survive freezing temperatures, it thrives in warm environments, in temperatures that range from 70 to 90 degrees. Brown patch is most prevalent on lawns that are moist or wet for lengthy periods of time.

The fight against brown patch begins with prevention. Avoid applying fertilizer with too much nitrogen during summer and early fall when lawns are the most susceptible to brown patch. Incidents of brown patch can be reduced if you can decrease extended periods of wetness and dew on your grass. Avoid watering more than once a week or at night in order to prevent excessive moisture.

A fungicide is often necessary in extreme cases of brown patch. Fungicide as a preventative method is usually more effective, though, because treating an existing brown patch infection can take several treatments before it is successfully cured.

Call Cardinal Lawns today at 614-808-4446 and let's talk about how we can help treat for Brown Patch and other common Ohio lawn diseases.