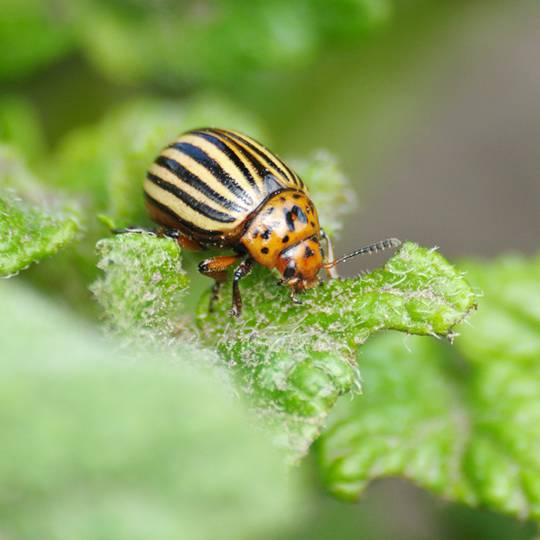 Gardeners, beware! If you’re growing potatoes, tomatoes, eggplant, or peppers, keep an eye out for potato beetles (leptinotarsa decemlineata). They have a voracious appetite, are highly fertile, and tend to resist insecticides.

Female beetles can lay up to 800 eggs at a time, and the underside of plant leaves is their preferred maternity suite. Once hatched, larvae begin to feed on the plant. This feast can last for several weeks or up to two months. Once they’ve had their fill, potato bugs burrow into the soil and enter a dormant pupate state. A mature adult emerges a few weeks later (depending on conditions) and continues to feed on foliage as well. Large family reunions with three or more generations of this very fertile species can spring up in a single growing season. There’s no need for a rain date.–the potato beetle is very adaptable to unstable conditions, including insecticides, which makes it a difficult pest to control.

To catch them in the egg stage, look underneath the plant leaves for anything bright orange. Young potato beetles are bright red with a hard shell and two rows of ridges across their humped backs. You may also notice lines of black dots along each side of their bodies. Adult potato beetles are small, yellow and black striped bugs.

If you see any signs of the eggs or beetles on your plants, you can hand pick them off early in the season to control any spreading or damage. Simply drop adults and larvae in a bucket of soapy water. Keep an eye on your plants for several weeks, since adults spend the winter in the soil and can colonize host plants for one month and live for a whole year.

Remove dead plants from your vegetable garden each season and till the bed so that these beetles have fewer places to hide. Certain planting techniques, such as rotating crops, adjusting the time of year that you plant, and using mulch can all help to suppress potato beetle populations.

Synthetic insecticides should only be used in home gardens when other methods fail, and when there is at least one beetle per plant. For best results, rotate insecticides with different active ingredients to ensure the beetles haven’t adapted to one.

Contact Cardinal Lawns before beginning a chemical treatment program. Since resistance to insecticides can vary dramatically by region, we can help determine what option is best for you and your garden.

Call Cardinal Lawns today at 614-808-4446 and let's talk about how we can help treat for Potato Beetles and other common Ohio lawn pests.