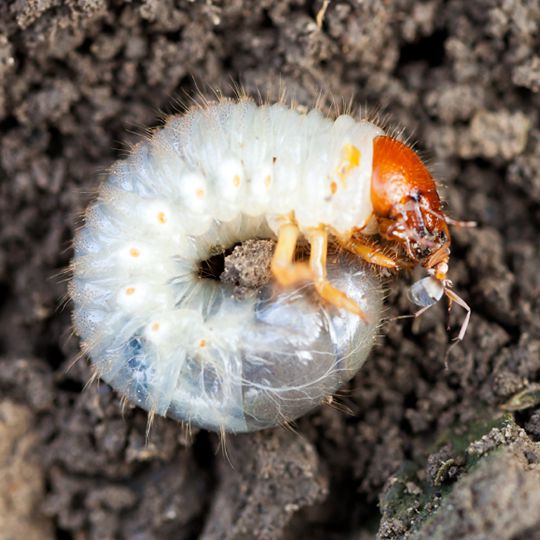 Lifespan: Most species survive for one year, but may beetles and June bugs can live up to three years.

Grubs (phyllophaga) are the larval or immature form of certain beetle species. These C-shaped critters are white and wrinkly. Measuring from ¼ to more than one inch in length, they have soft, bodies with legs near their heads. Grubs are often considered the most reviled lawn pests in the region because their presence can go undetected until significant damage is already done. They live in soil and feed on the tender roots of your grass.

Beetles develop in four stages. First, the female lays eggs in the soil in July. Two weeks later, the eggs hatch and emerge in their second form: the grub (or larval) phase. In the grub stage, the larvae eats, molts (by shedding their skin), and grow. By autumn, when the temperatures have dropped, grubs burrow into the soil and spend their winter below the frost line. By early spring, the grubs have moved back up toward the surface. They feed on roots and then enter their third stage, known as the pupal stage. The insect emerges from its pupae, now as an adult beetle, in late June to early July and searches for food and a mate, beginning the cycle again.

Because grubs lurk beneath the soil’s surface, their presence is usually noticed only after the damage has begun. Grub damage takes the form of irregularly shaped brown patches on a lawn. It usually makes its first appearance in August is sometimes mistaken for drought harm. Unlike a drought-damaged lawn, grub-infested turf peels up easily from the soil because its roots have been depleted. Other signs are indicated by flocks of birds that descend on your lawn or turned over, damaged areas of grass. Birds, moles, and skunks feed on grubs and will cause additional harm to your turf as they search for their next feeding.

Grub infestations can be prevented when you keep your lawn healthy. Fertilize, mulch, and keep your turf at least two inches high (beetles prefer laying their eggs in grass cut short). Water sparingly, but soak the ground when you do, as this encourages grass to grow stronger, deeper roots. It is also important to aerate soil regularly because beetles prefer compacted, undisturbed soil when they lay their eggs.

Before treating for grubs, try to estimate the extent of your infestation first. Turn over the top layer of soil on a square foot of turf. If your grass peels back easily, or if you reveal six or more grubs, it is time to start treatment. Remember, there are multiple species of grubs, so certain treatments are only meant for a specific type of grub.

Nematodes: tiny worms that live in the soil and kill all species of grubs. Handle carefully—they are a live product!

Milky spore: only effective for controlling Japanese beetle grubs. It usually takes a few years for milky spore to become established in the soil, but its effects can last up to 10 years. A host grub is required, so this method cannot be used in combination with a chemical grub control.

Timing is imperative when dealing with chemical grub control. The best prevention is to locate grubs early, right after they hatch and before they start to feed, because this is when they are most vulnerable to treatment. July or early August is the best time to treat a lawn for grubs.

Call Cardinal Lawns today at 614-808-4446 and let's talk about how we can help treat for Grubs and other common Ohio lawn pests.