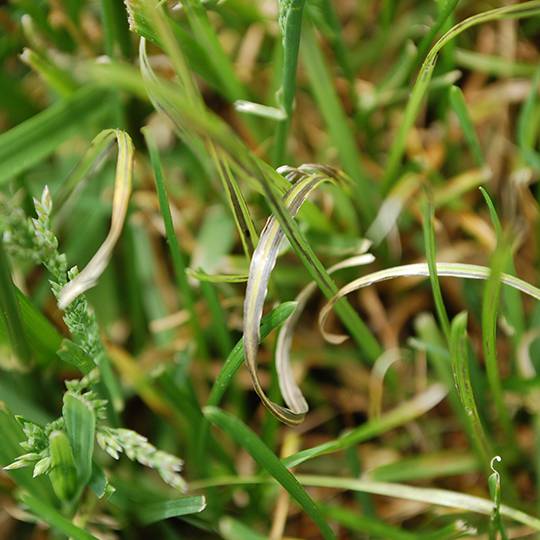 Stripe smut (ustilago striiformis) is a perennial disease that survives cold weather in a dormant stage. It either survives as spores in the soil or within the infected grass blades. The spores of stripe smut spread through a variety of means, such as rain, wind, and lawn mowing.

Stripe smut is common in young lawns as well as new grass seedlings. This is because the diseased spores linger in the soil, attaching to seeds as they grow. Stripe smut can grow in patches, large swaths, or it can even cover the entire lawn.

Stripe smut is most common in cool, damp climates with temperatures ranging between 50°F and 60°F. The disease is most recognizable in spring and fall. Initially, the infected grass appears slightly lighter in color than the grass surrounding it. Later, a dark mycelium grows along grass blade’s veins, eventually rupturing them. This causes the grass to wilt and curl into thin, dark-brown strips.

Grass affected by stripe smut can die after a hot, dry summer. A hot, damp summer can encourage more fungal diseases to appear on a lawn that is already weakened by stripe smut, which can cause grass to die as well.

Avoid treating your lawn with nitrogen in the summer. This can help to reduce the likelihood of the appearance of stripe smut. Core aeration loosens the soil and punctures thatch, which allows for better drainage and reduces soil dampness. Reseeding your lawn with seeds treated with fungicide is also a way of reducing stripe smut infections.

Apply stripe smut fungicides in the late fall, just before the disease goes dormant for the winter. Soil treated with stripe smut-oriented fungicides should be given an inch of damp soil’s worth of water. Call Cardinal Lawns today for assistance in your battle against stripe smut.

Call Cardinal Lawns today at 614-808-4446 and let's talk about how we can help treat for Stripe Smut and other common Ohio lawn diseases.